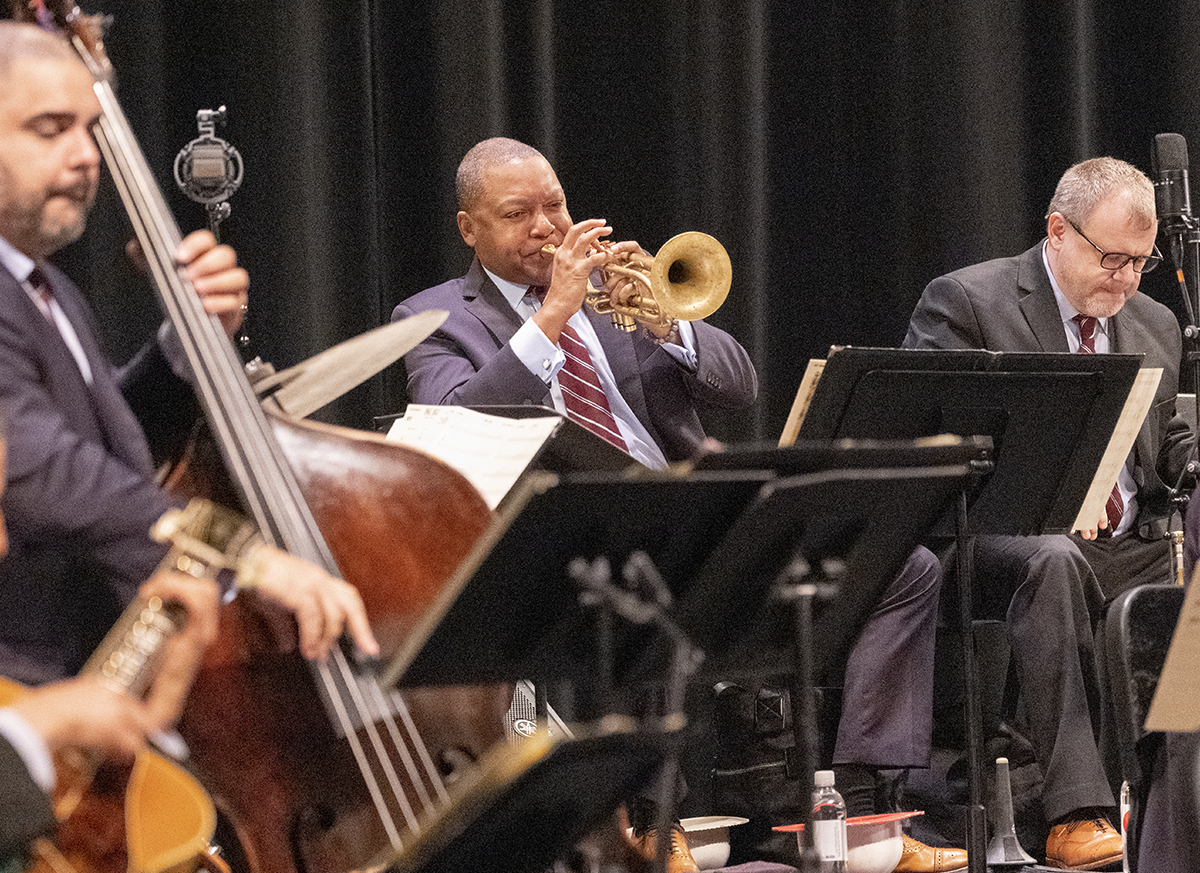 On December 9th, ColaJazz in partnership with the Koger Center for the Arts and the UofSC School of Music was proud to present arguably the world’s greatest big band and its leader, the incomparable Wynton Marsalis. Also joining the band was the phenomenal vocalist Alita Moses.

This was the second performance by Wynton Marsalis in Columbia, SC this year. On May 2nd, the Wynton Marsalis Septet performed the closing night of the 2021 ColaJazz Festival at the Koger Center for the Arts.

The Big Band Holidays concert was an extraordinary evening. The audience enjoyed the up-close-and-personal experience of the Johnson Hall Auditorium located in the Darla Moore School of Business. The band played exceptionally well and swung hard. Soloists stepped up and stepped out! The holiday arrangements crafted by various band members were colorful, complex and fascinating. Everyone in the band possessed a skill and tone on their instruments that only the absolute best can achieve.

Alita Moses sang with great poise employing a subtle soulfulness that grabbed your heart. She was simply delightful and a brilliant addition to the band. The standing ovation at the end was an inspiring seal of approval!

The following morning on December 10th, the JLCO all showed up to Eau Claire High School and presented a modified holiday concert and jazz workshop for approximately 480 students from ten Title-1 schools. While the students clearly were happy to be on a field-trip, by the time the concert ended, you can tell they were moved and experienced something they will not soon forget. The band came in as hot and prepared as the night before and played hard. Wynton’s opening solo let every know they were here to handle their business at the highest level possible. The band followed suit.

“Since the very beginnings of ColaJazz, I have had major goals for our city and state when it comes to presenting jazz – offering the best in arts & culture to our communities – all while creating opportunities for our musicians. One of those goals was to bring my mentor Wynton Marsalis and his bands to Columbia, SC. In 2021, this became a reality. Teamwork makes dreams work. ColaJazz, Koger Center for Arts and UofSC School of Music, not only presented the Wynton Marsalis Septet – a rare, rare event – but, we also presented the entire Jazz at Lincoln Center Orchestra! The logistics and costs were far beyond anything we’ve done in the past, but now that we have, the stars have no limits!”

Have you seen our Member benefits?
Don’t miss a beat! Get on the eNewsletter.

We are deeply thankful for those who step up to support the arts & culture in our city and take an active role in making Columbia an exciting and fulfilling place to live, work and play.