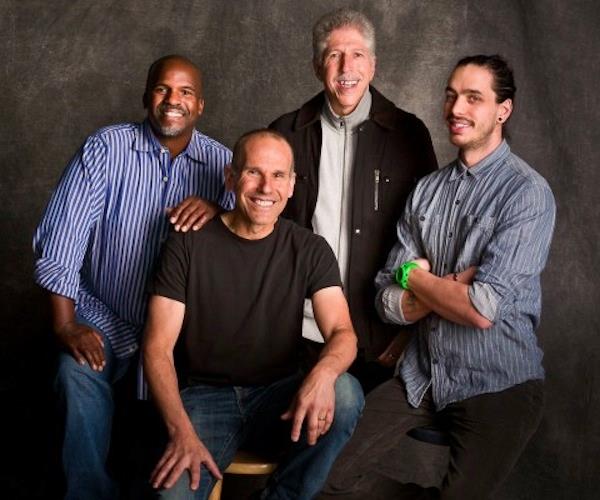 An Evening With The Yellowjackets (Charlotte NC)

In 1977, Robben Ford assembled a group of veteran session musicians to record his album The Inside Story. The trio of musicians, which included keyboardist Russell Ferrante, bassist Jimmy Haslip and drummer Ricky Lawson, soon discovered a certain “chemistry” and musical affinity that led to their formation of Yellowjackets. The Inside Story being mainly instrumental, Robben Ford’s record label wanted him to record another album that was more pop and vocal oriented. The group, known as the Robben Ford Group, preferred to pursue the instrumental route, and a “band within a band” was formed. This same group with Robben Ford on guitar recorded digital demos that were eventually accepted by Warner Brothers, and Yellowjackets was born. While Robben’s contributions would diminish over the years to being a guest artist, the group known as Yellowjackets would flourish.

Their debut album Yellowjackets made serious waves in jazz radio, garnering public and critical acclaim. Mirage A Trois followed in its footsteps. While they went on a brief hiatus to pursue other projects, they reassembled in time for the 1984 Playboy Jazz Festival, adding percussionist Paulinho Da Costa and their new lead voice, sax man Marc Russo. This landmark concert paved the way for their eventual success both on the Billboard Jazz charts and concert venues around the world and resulted in the third spicy Yellowjackets album Samurai Samba. 1986 saw the group moving over to MCA Records to record Shades, the title track being written by Donald Fagen (of Steely Dan fame) as a tribute to the many “shades” he heard in the group’s music.

What’s In A Name? If you’re expecting something cute or meaningful in the naming of the group, you may be disappointed. Russell Ferrante relates the following on how the group’s name was chosen: “I wish there was a clever rationale, but there really isn’t. At the time we were making our demo in hopes of landing a recording contract, we were still the “Robben Ford Band”. We had recorded one record with Robben, (primarily instrumental) but his record company was “encouraging” him do do something more pop and vocal oriented. As we also wanted to continue playing instrumental music, we all decided to form a “band within a band” so to speak. At the demo session Jimmy brought in a sheet full of possible names, most just awful. The one that popped out was Yellowjackets as it seemed to connotate something lively, energetic, and something with a “sting”. That’s really about as deep as it went. Once you choose a name, you’re stuck with it so here we are, 16 years later, grown men playing in a band named ‘Yellowjackets.’