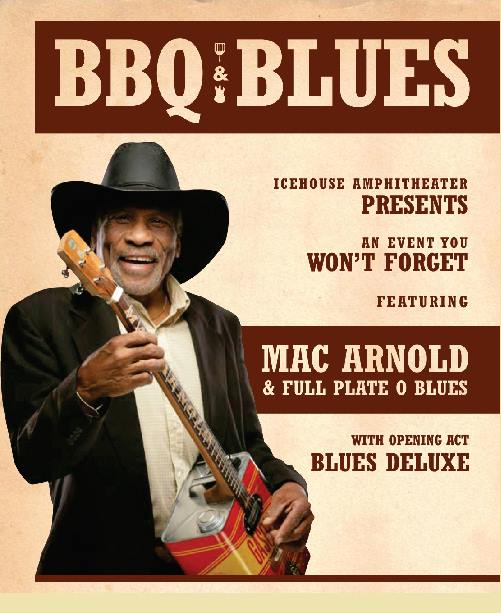 BBQ & Blues is back at the Icehouse Amphitheater featuring Blues Hall of Famer Mac Arnold & Plate Full O Blues. Mac was born in Ware Place, South Carolina, one of 13 children born and raised on a sharecropper’s farm. His musical journey began in the 1950s when he and his brother Leroy fashioned a guitar from a steel gas can, broomsticks, wood, nails, and screen wire. He has since become famous for the gas-can guitar and has taught many other people how to make them.

His early career included working with a young James Brown in the band J. Floyd & the Shamrocks. Arnold moved to Chicago in 1965, where he worked with A.C. Reed prior to joining Muddy Waters’ band in 1966. Arnold appears on the November 1966 live recording released in 2009 as Muddy Waters – Authorized Bootleg. He formed the Soul Invaders in 1967, finding work backing up B.B. King, The Temptations and others. His studio work in the 1960s includes playing bass on several notable blues albums, including Otis Spann’s The Blues Is Where It’s At, and John Lee Hooker’s Live At Cafe Au Go Go. He performed in various session work after moving to California in the 1970s. Arnold’s distinctive bass line can be heard on the theme for the TV show Sanford and Son.

By the 1990s, Arnold had grown weary of the road life and returned home to Pelzer, South Carolina and virtual retirement from the spotlight until 2006, when he was convinced to front his own band, Plate Full O’ Blues. In 2013, Arnold opened his own restaurant in Greenville, South Carolina’s historic West End, Dr. Mac Arnold’s Blues Restaurant, where he hosted his popular yearly music event, The Cornbread adn Collard Greens Blues Festival. Despite much local success in the food business, he decided to close the restaurant in August 2017 to once again concentrate on music, especially after his nomination into the Alabama Blues Hall of Fame. Joining Mac on stage will be his good friends from Columbia, SC Blues Deluxe.

Along with the great Blues music we will have free samples of BBQ from local restaurants. Try them all and vote on your favorite. The samples are included in the ticket price.

Advanced Tickets are $15, Day of Tickets are $20. Tickets can be purchased by clicking the link below or at Fatz Cafe located at 942 E Main St.
This event is Rain or Shine. Children 6 and under do not need a ticket.