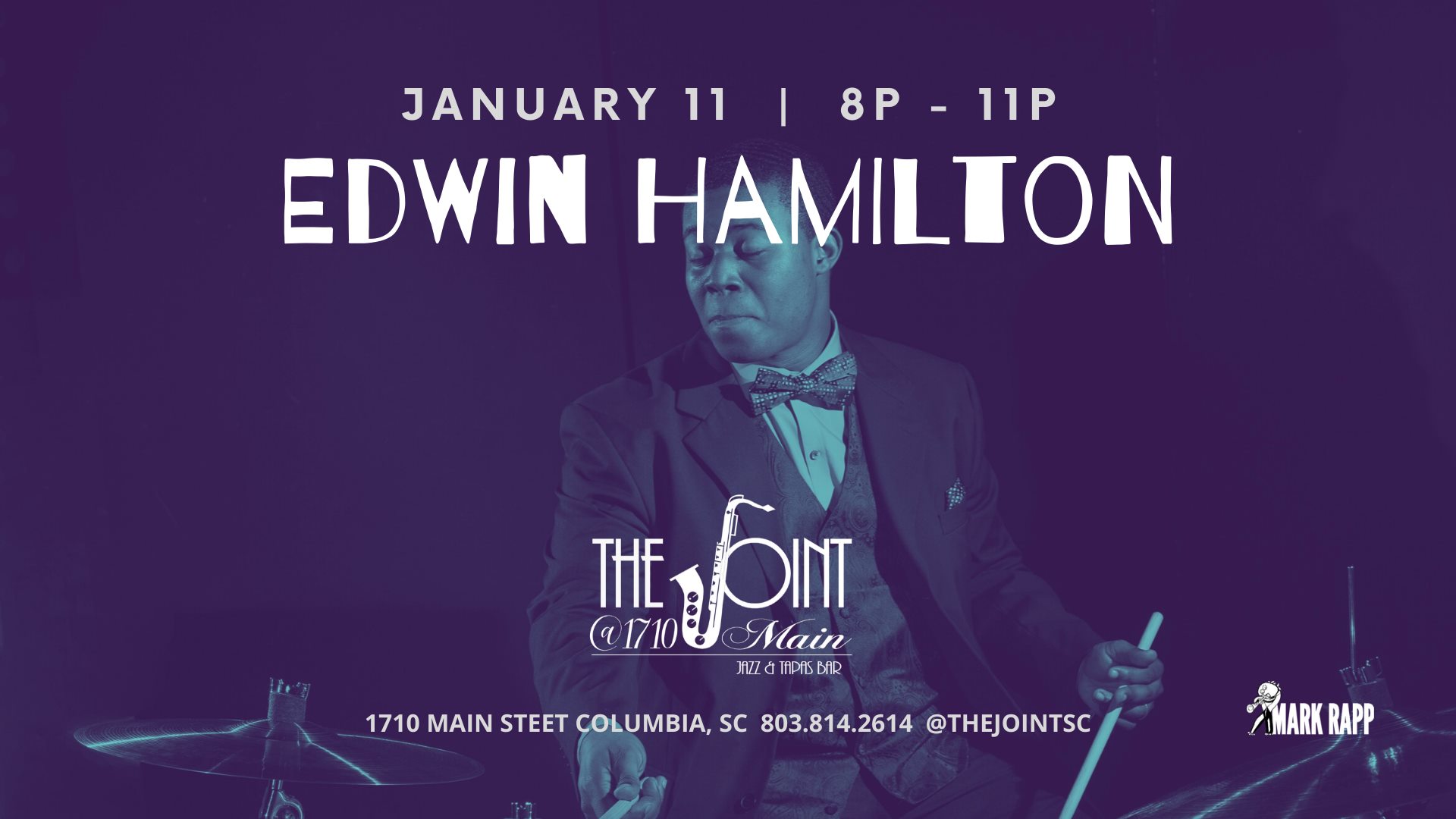 Brought to you by The Joint at 1710 Main & Mark Rapp of ColaJazz!

Edwin Genavus Hamilton was born into a highly musical family on May 1, 1991 gaining influence from both his talented mother and father. His father is a proficient guitarist who is recognized in the community as a pioneer who started it all musically in the area. Edwin started on both the drums and the piano and his influences definitely are deeply rooted in the church. Growing up Edwin watched his father and learned from him; he began playing piano at age 5 and he mastered his father’s style on piano then went into individual study, practicing his own style and developing chords to add to Gospel music.

He also gained the natural vocal gift from his mother. He developed a unique and keen ear for music that is very rare. He also grew up playing behind his father on the drums. Incredibly Edwin did not ever own a drum set until later in his life (age 19) when he bought his own; so growing up without a set, he developed and practiced his craft at church and at school and at home (for speed and stick control he practiced on pillows).

As Edwin got older, his love and passion for music grew, as well as his curiosity. He listened to all styles and genres of music listening and playing behind the radio and the many different records his father and mother had at home. One day he stumbled upon Jazz and fell in love at first “sound”. He then took efforts to learn Jazz music. Edwin has never studied exclusively with a teacher and is largely a self-taught pianist/drummer. But he has had many lessons in studying and dissecting the Masters on YouTube as well as learning from publications/method books. Edwin is a sponge and soaks up everything he hears. “I like to experiment with different rhythms and/or different chords or techniques in my music.”

Edwin G. Hamilton is a professional musician and an educator. His dedication to the art of music is inspiring. In 2014 he earned a Jazz Fellowship to go study in New Orleans, Louisiana under the great Herlin Riley. At his young age he has already performed, recorded and/or worked with notable names such as: Teddy Adams, Explorer’s Club, Chris Crenshaw, Michael Dease, Calvin Edwards, Delbert Felix, Mike Frost, Aaron Goldberg, Wycliffe Gordon, Niki Haris, Enrique Hernandez, Charmaine Neville, Delfeayo Marsalis, Wynton Marsalis, Shannon Powell, Marcus Printup, Vinny Raniola, Herlin Riley, Christian Sands, Tye Tribbet, Donald Vega, Frank Vignola, Christian Winther and many more. Edwin has also played on big stages/arenas in front of crowds of over 10,000 and has toured the United States, extensively; he performed on a European tour (Switzerland) with renowned vocalist, Niki Haris (2014). In August of 2015, he released his debut album, The Whole World Must Change.

Edwin’s talents, hard work and professionalism have made him one of the most sought after drummer/percussionists in the Southeast. He also drums locally for many different groups in the CSRA (Central Savannah River Area) where he is first call. He is currently the drummer for the Mike Frost Band. Edwin proudly serves as the Minister of Music at Olive Branch Baptist Church in Batesburg-Leesville, South Carolina under the direction and leadership of Rev. Dr. James E. Dukes. He maintains a private instruction studio and loves to teach serious students lessons. He is also thrilled to be on staff at the Jessye Norman School of the Arts as a Music Instructor. Edwin endorses four companies: Arti Dixon Bass Drum Lift, Beato Inc. (drum bags), Kopf Percussion (cajons) and Stellar Custom Drums (wood hoops). Edwin is a virtuoso and for him, the best is yet to come… and the beat continues.