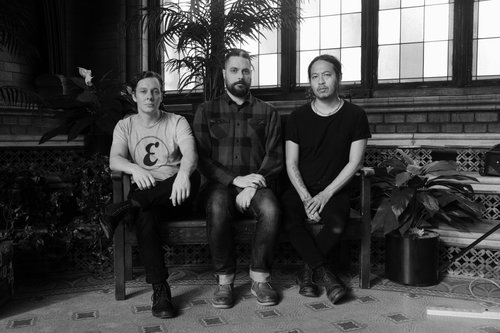 KUZU is a hard-charging but patient trio that came together in the fall of 2017, after saxophonist Dave Rempis, a stalwart of the Chicago improvised music scene, worked with both Tashi Dorji (guitar) and Tyler Damon (drums) individually as part of a lengthy solo tour of the U.S. that he undertook in the spring of that year.  Dorji and Damon’s work as a guitar/percussion duohas become well-known, a highly refined and specific language developed through relentless touring and recording over the last few years, with a sound that straddles improvised music, rock, and any number of as-yet-undefined territories.  These two provide an incredibly fresh take on the possibilities inherent to spontaneous composition.  Superimposing Rempis into this mix was a logical next step after the relationships they’d forged individually.  The trio’s forthcoming debut record Hiljaisuus (“silence” in Finnish…) is slated for release on the well-known Astral Spirits labelin summer 2018, to be followed by two separate tours of the United States in late summer and fall.

Musically, these three create a highly focused pallet of sounds. At times, spacious gestures carve up the canvas with the austerity of a calligrapher, while at others those sparse gestures build into an unstoppable tsunami of energy.  Those waves are never impulsive or impetuous though, they ebb and flow logically and patiently out of simple and clearly defined sources.  This trio pursues every gesture with tenacity, passing them back and forth until they’ve explored every facet of an idea.