Jim Mings is easily one of South Carolina’s greatest treasures. He is a beautiful cat inside and out, an encyclopedia of jazz songs, a brilliant guitarist, and one of the most interesting improvisers you’ll experience. Whether he’s playing a standard from the American songbook or a country tune, without fail, it is deep in the pocket and more melodic than you can imagine. His improvisational ideas are truly in the moment, heartfelt, authentic, honest, and soulful. He can play the same song 10,000 times and never repeat himself. Jim Mings is an artist.

The 2021 season of ColaJazz LIVEstream concerts is made possible by
a generous grant from the Central Carolina Community Foundation.
.
.
. 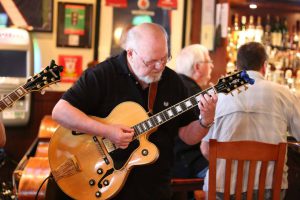 Jim began his career in his hometown of Austin, TX. By the age of 15, he performed nightly at Austin nightclubs, including The Continental Club, Vulcan Gas Company, and Armadillo World Headquarters. During his early Austin days, Jim was considered one of the city’s top blues and rock guitar players. His admirers were none other than the young Eric Johnson and Stevie Ray Vaughan, both of whom have mentioned him in interviews as one of their early blues guitar influences. Jim has performed with Johnny Lee Hooker, Jimmy Reed, Chuck Berry, Janis Joplin, ZZ Top, and Jimmy Vaughan.