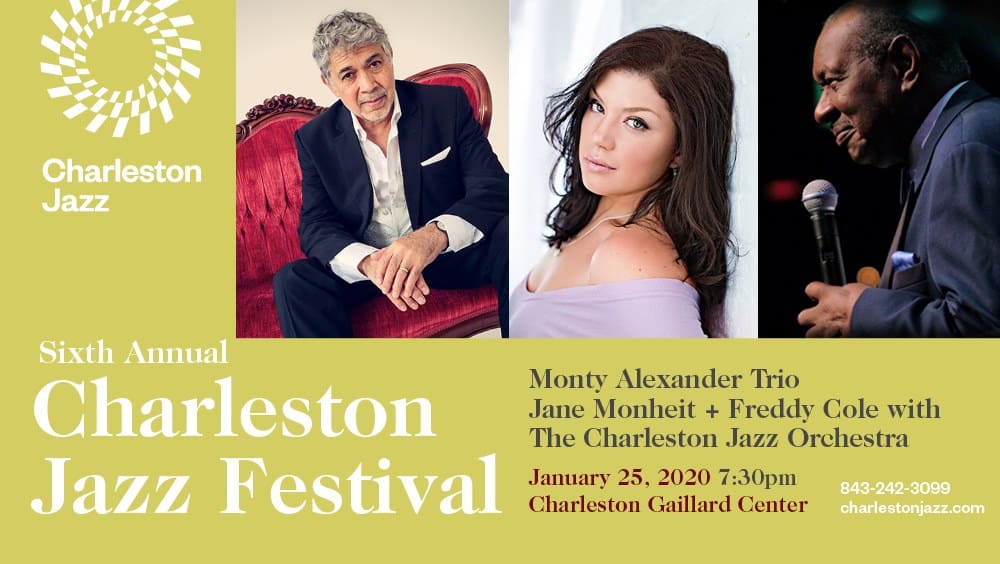 The evening begins with a performance by the Monty Alexander Trio, followed by the Charleston Jazz Orchestra performing with vocalists Jane Monheit and Freddy Cole.

Originally from Kingston, Jamaica, Grammy-nominated pianist Monty Alexander is an American classic, touring the world relentlessly with various projects delighting a global audience drawn to his vibrant personality and soulful message. A perennial favorite at Jazz festivals and venues worldwide, his spirited conception covers a repertoire spanning a broad range of jazz and Jamaican musical expressions – the American songbook and the blues, gospel and bebop, calypso and reggae.

Blessed with “a voice of phenomenal beauty” (Stephen Holden, New York Times), Jane Monheit has had plenty of milestone moments in establishing herself as one of today’s best and most important vocalist-musicians. The twice Grammy-nominated singer has released 12 solo albums and has collaborated with Michael Bublé, John Pizzarelli, Terence Blanchard, among many others. Her latest release, The Songbook Sessions: Ella Fitzgerald, pays joyous tribute to the legendary singer, while sharing a definite portrait of herself.

The legendary Freddy Cole, a four-time Grammy Nominee (most recently a 2019 Grammy Nominee for Best Jazz Vocal Recording) was born in 1931, the youngest of Edward and Paulina Nancy Cole’s five children. His three elder brothers, Eddie, Ike and Nat (twelve years Freddy’s senior) were all musicians taught by their mother.At the young age of 88, Freddy Cole’s career continues to ascend as he has moved into the front ranks of America’s homegrown art form with a style and musical sophistication all his own. Nominated for a 2019 Grammy for Best Jazz Vocal Recording, masterful vocalist and pianist, Freddy Cole captivates listeners with his elegant presence, subtle phrasing, and intimate singing style.

Please note that for this performance online purchases have a limit of eight (8) tickets per purchase. To purchase additional tickets or to inquire about group sales, please contact the ticket office directly at (843) 242-3099.