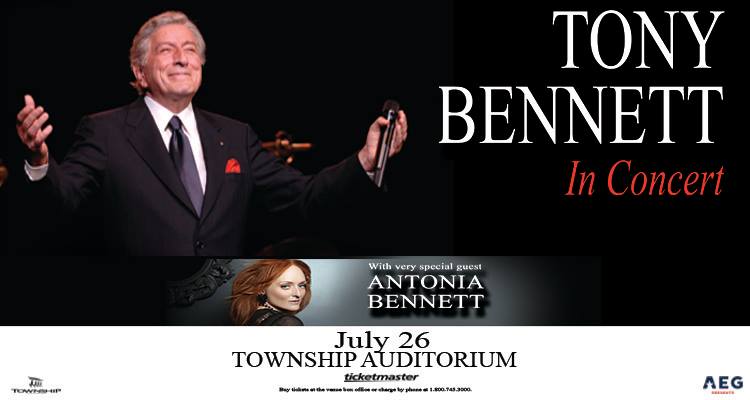 Tony Bennett at the Township

Tony Bennett’s life and philosophy is the embodiment of the Great American Story. Having celebrated his 90th birthday on August 3rd 2016, his career as the pre-eminent singer of the 20th and 21st centuries is unprecedented. He continues to be embraced and loved by audiences of all generations.

Through his dedication to excellence and his insistence on quality, he has become the keeper of the flame by extolling the virtues and values represented by the Great American Songbook. Tony Bennett has been on the front lines of every major issue impacting the cornerstones of this country’s modern history. He has performed for eleven U.S. Presidents, is a World War II veteran who fought in the Battle of the Bulge and participated in the liberation of a concentration camp, and marched side by side with Dr. Martin Luther King in Selma to support civil rights. Throughout his life, Tony Bennett has been a dedicated pacifist and proactive humanitarian selflessly supporting many causes whose goals benefit the lives of millions. His love for his country has earned him the distinction of national treasure and the United Nations has named him a Citizen of the World as one of their foremost ambassadors.

Through his music, Tony Bennett has connected in unprecedented fashion with all generations of audiences. His commitment to humanitarian ideals has bridged our differences by highlighting what we have in common as citizens of the planet. He has fought for the hard issues when others have turned a blind eye and has remained true to the authenticity and creativity of his musical vision. Tony has achieved the Great American Dream but has never forgotten his own roots and is constantly working toward ensuring that others can achieve their dreams as well. His life story is compelling in the lessons and values that it teaches: dedication, commitment, courage, and compassion.