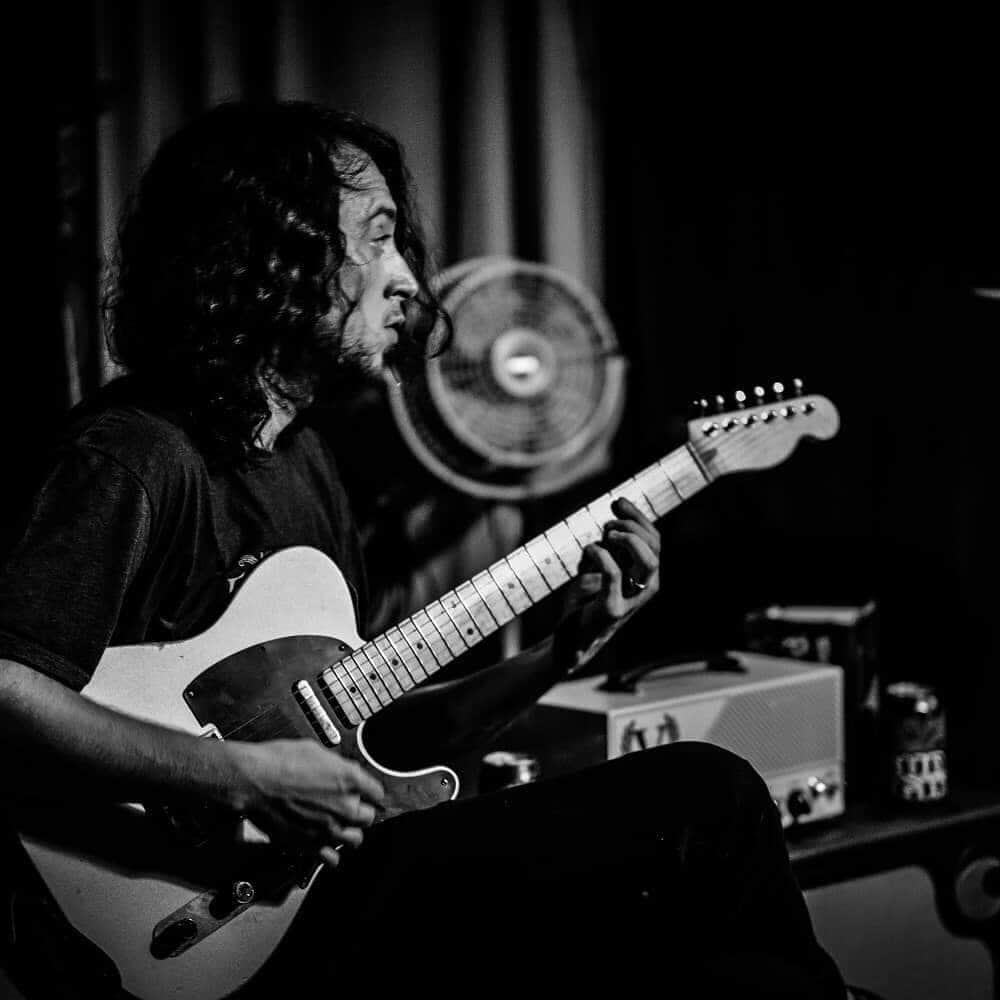 Niles Lewis is a dynamic player with a fun, energetic personality. He has a well-earned reputation for making the most intriguing facial expressions during his adventurous and thoughtful solos and is simply a joy to listen to, work with, watch and be around. He recently joined up with the Tony Lee Group, a Columbia-area genre-bending favorite, and is very often found playing in a variety of settings with a number of different groups. Niles is a passionate educator and lives the music. In short, he’s out in the scene making our capital city a better place. Let’s hear what he has to say…

Earliest memory of jazz?
I had been playing guitar for a couple of years and I really dug Zeppelin a lot, the song “No Quarter” especially because the first solo is really clean and a little out sounding compared to what I was used to hearing in rock music. I asked my dad if that was jazz and he laughed and handed me an old cassette of Miles Davis’ Kind of Blue and Coltrane’s Giant Steps.

Is there a story behind latest recording?
Yes there is. I recently got married this past October and as a wedding gift to my wife, I recorded a handful of originals and a cover. I released one song out of those songs called “Something Special”. You can find them at nileslewis.bandcamp.com. I am hoping to have an EP out by the end of 2019 or start of the new year.

Favorite tune to play?
I have a lot of regular covers that I cycle through, but one I will always love is “All Blues” by Miles Davis. This was first song I listened to on Kind of Blue when my dad gave me that cassette. I am a blues guitarist at heart and I love digging into a slow blues or shuffle.

How long have you been performing in Columbia?
4 years or so. I am originally from Barnwell, SC.

Favorite venue to play?
New Brookland Tavern, the White Mule, the Joint on Main. I like venues that have an attentive audience and thankfully Columbia has a number of those.

What other places have you played other than Columbia and how does Columbia compare?
I haven’t spread my wings anywhere near as much as some guys in town, but Charleston, Augusta and Greenville to name a few.

Most memorable experience as an artist?
Being an endorsed artist and exhibitor with Vertex Effects and J Rockett Audio Designs for the NAMM show the past 2 years. A ton of fun and am always grateful to be able to be mentioned alongside some insanely talented players as well as some I have looked up to since I was a kid.

What music genres affect you and why?
Rock blues funk reggae country metal….I grew up a rocker (and always will be to an extent) and when i was introduced to blues, my mind was blown. The emotion that guys like SRV, the 3 kings, Hendrix, etc could convey through their music and guitar was something that struck a nerve in me and something I try to do anytime I play. The same thing happened when I discovered Miles and Coltrane….and again when I discovered guys like Wes, Sco, Scott Henderson. I love studio guys who can do it all and play over whatever style track they are asked to.

Favorite jazz artists?
I have mentioned some throughout but ones I haven’t that I love are Wes Montgomery, Kurt Rosenwinkel, John Scofield, Robben Ford, Grant Green, Kenny Burrell, Mike Stern, and tons of others.

Who were some of your mentors growing up?
My dad was my first mentor and inspired me to play guitar. He played drums for 20 plus years in a ton of different bands and I would go to his rehearsals when I was young and shows when I was allowed to. I was self taught for around 10 years and he had a way of making me feel like I was really getting better at guitar but he also kept me grounded. He introduced me to everything from Miles Davis to King’s X. Don Russo has been the biggest mentor for me and has shown me a ton about the guitar and in my personal life and I am thankful for his guidance. Not only how to be a better guitarist, but a professional musician as well and that is just as important as being proficient on your instrument. Mark Rapp also was a big mentor for me while when I took a jazz class with him with other instructors at Freeway that wanted to dig deeper into jazz. The way he broke down how he learns tunes and analyzes songs helped me a lot as well.

Best advice you’ve ever received?
It’s not what you know, it’s what you sound like. You can have all the theoretical knowledge in the world, but how can you present it? Can you tell a story with it? Restraint is major. I still have trouble with it time and time again, but when you can dial back and make the audience wait for it, that’s when you get it right.

Best advice to give a musician?
Be prepared. Never take a gig for granted, you owe it to yourself and the people you play with to come prepared to any rehearsal or gig. Also, always try to surround yourself with better musicians than yourself. You learn on the gig that way and better musicians tend to bring out the best in yourself.

Music is a way of connecting with people. What are your thoughts on this? What are some ideas and values you’d like to reflect in your music?
I believe that is the most important part of music. I am a big believer in truly being able to feel whatever it is you’re playing. I can express emotions and feelings on the guitar that I can’t in any other way. Authenticity is a huge part of my playing and that is really important to me.

How often do you practice or give time to your craft?
Thankfully, I teach guitar at Freeway Music full time so I am playing constantly throughout the week during the day. I try to put aside around 2 hours a day give or take to practice guitar. Whether that’s shedding licks, transcribing, or writing….I have one goal on the guitar everyday: be better than I was the day before. No matter how big or small that may be, steady progress is better than no progress.

Tell me about your band and how everyone came together or about the musicians you usually play with.
I love all the people I play with. I recently joined the newest iteration of the Tony Lee Group along with my man Rodney Foster Jr. Tony’s group was my favorite band to go see live when I started playing in Columbia because of the rotating vocalists and I really enjoyed listening to his guitarist Zach Bingham at the time. Zach is a monster player and I learned a ton by just going and checking them out at Speaks on Thursday nights. I am excited to continue playing with Tony going forward and writing and playing my own originals. I have previously played in a country band that was popular in town (the Nick Clyburn Band) and will play rock originals and cover shows with Jeff Lucero’s band as well. I like to play with as many people as I can to keep me on my toes as well as make new friends in music.

Have you ever lost your instrument or gear during travel? Or do you have a funny story from the road or gig?
I have been lucky to have never lost any gear traveling. There are plenty of stories, but one in particular I remember playing with the Nick Clyburn Band is playing at Mac’s in Hartsville and when we kicked into Folsom Prison Blues by Johnny Cash, out of nowhere this dude walks in the bar and starts a fight with another guy that seemed to be minding his business at the bar. We got a kick out of it and turned it up a notch while they got the fight out of their system.

What does the Columbia SC jazz scene do well and what does it need to do better?
I think the jazz scene is great here and is the strongest part of the Columbia music scene. The players are really killer and could play anywhere they wanted to. I feel like some people have the perception that jazz musicians and jams are pretentious but here in Columbia it’s not like that. I am without a doubt one of the lesser schooled musicians in the jazz scene and I have been welcomed with open arms by guys that can run circles around me. I think there are things that every scene can do to improve, but the biggest thing to me is just going out and supporting other players and people in the scene. Go to their shows, push their social media content, etc. We are all in this together and as long we all keep that mindset, the scene will continue to grow and prosper.

Anything else you’d like to add?
Yeah, I want to say thank you to my wife who told me I could do this for a living and always picks me up when I have a rough go on the gig.