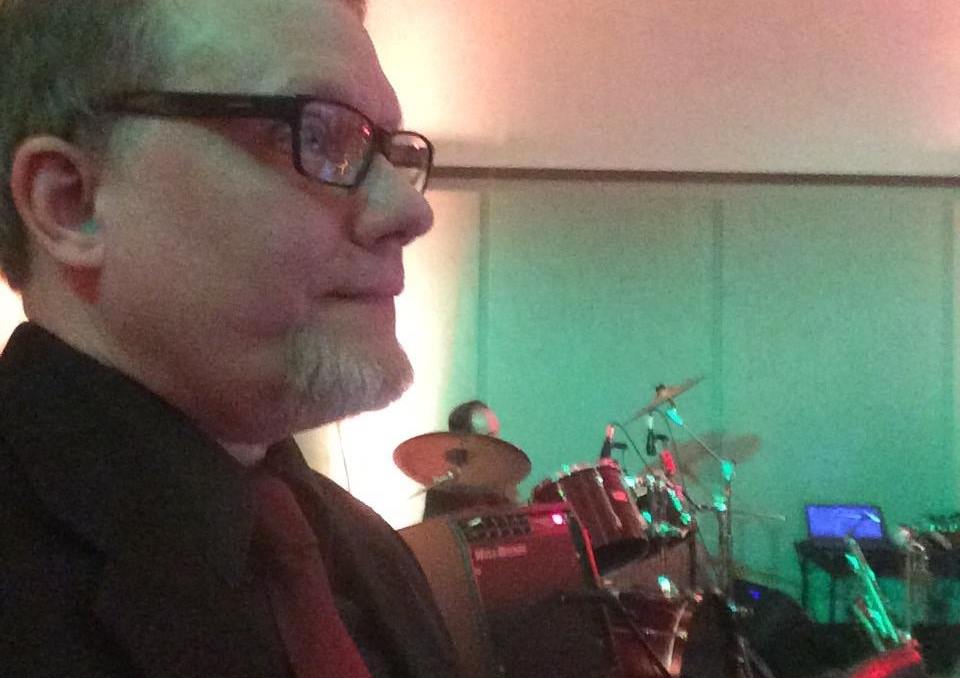 Kyle Whitlock is a very unassuming cat, but he has a rich, colorful history – he’s shared the stage with Delbert McClinton and once played piano at a private reception for former President Gerald Ford. He’s quiet, he’s friendly, he’s good people. He plays with a wide variety of artists around town and has a great synergy supporting and performing with Eboni Ramm. He’s got some cool stuff going on and is a great advocate for growing our jazz scene.

What is your earliest memory of developing a love for jazz music?
10 years old

Where did you study music?
I took two music classes at USC-Columbia and tutored with a private teacher for a few years after college in the late ‘70’s. Other than this I am primarily self taught.

Is there a story behind your latest composition or recording? Where can we find it?
I have written many instrumental compositions of different genres through the years, but my favorite jazz composition “Monk approved” pays tribute to one of my favorite jazz piano composers- Thelonious Monk. You can listen it at https://soundcloud.com/koolkat-music-productions/monk-approved-kyle-whitlock or download it at http://store.cdbaby.com/cd/kyleandthefunkdawgs .
This song is off of the Album “Dawg tracks,” recorded in home studios by the Funkdawgs, a band whose members live in three countries and write music via the internet.

What is your favorite tune to play and why?
“A night in Tunisia,” by Dizzy Gillespie.

The advanced harmonic changes and melody speak to my soul! Plus it was written by a composer from our fine State!

How long have you been performing in Columbia?
Since 1975

Do you have a favorite venue in Columbia?
Not yet but the Good life cafe and Chayz lounge in downtown Columbia have a nice vibe!

What other cities, states, and countries have you played in and how do those experiences compare with Columbia, SC?
I’ve performed in New York, Nashville, and Las Vegas plus through the Southeast including South Carolina, North Carolina, Georgia and Florida. My musical memories and experiences are generally the same no matter what city. I believe the jazz scene in South Carolina is on an uptick!

What is your most memorable experience as an artist?
I performed in Manhattan in 1993 at a reception where former President Gerald Ford was attending. I played solo jazz piano early in the evening then performed the rest of the night with a variety band from South Carolina. At the time the city was snowed in which made it tricky to get around! The drummer never made it to the gig since plane flights were grounded in Columbia. The band hired a drummer from New York to fill in, who was largely unfamiliar with our material. We made it through the night ok though!

What music genres and/or artists influence your style and approach and why?
Fusion is my favorite type of music because it represents so many different music styles. (Rock, jazz, blues, Eastern, reggae etc). Music with no limits or pretentious works best for me!

Who is your favorite Jazz artist?
I refuse to give just one answer!

Who would you give credit to as your mentor(s)?
Jay Knowles, former USC jazz professor that I tutored with years ago.

What is the best advice you ever received as a musician?
Learn how to listen. Listen to what the other players are playing, and learn how to properly blend your instrument and contribute! Diligently study the great musicians of the past and present, and learn how to tell your story to the world.

What is some advice or statements you’d like to offer to up-and-coming musicians, your peers, live music venues and/or the community in general?
Re: #12 answer above. Learn your craft and live it everyday. Network network network! Never expect a lot in this business because it is a tough business! You get back what you put in it!

Music is a way of communicating and connecting with people. What are your thoughts on this? What are some ideals and values you’d like to reflect in your music?
Communication skill is something I’m still working very hard on, even after performing for over 40 years. I believe it comes easier for some than others! In an ideal world people should be able to feel and understand what I’m playing at any moment in time….but jazz is an acquired taste for most people. My goal is to achieve 85-90% with the average Columbia audience.

How often do you practice or give time to your craft?
Everyday I practice and/or listen to great artists

Tell me about your band and how everyone came together or about the musicians you usually play with.
I am primarily a freelance musician at the present time, so I am performing with different folks every week . I am fortunate to have close ties with a big part of the wonderful and talented people that make up the Columbia music scene!

Have you ever lost your instrument or gear during travel? Or do you have a funny story from the road or a gig?
I’ve never lost an instrument before, but I managed to leave two pricey Keyboards at one of the venues…once inside the venue and the second time on the ground behind the venue in a totally dark parking lot. I managed to recover both instruments unscathed!!

What are some ways that we can expose younger generations to Jazz? What are your ideas on how you can help grow the scene?
Education-education-education!! I can’t say it enough as I see so many schools across our nation dumbing down the arts, and how appreciation of the arts in general is in a decline. We need more artists on the local level as well as more venues that will adequately support these artists!

What does the Columbia, SC jazz scene do well and what does it need to do better?
I believe Columbia venues need to do a better job at promoting entertainment, and finding new and novel ways of attracting and developing their audiences. In my honest opinion it seems like it’s all on the musicians now to do the marketing and PR-which leaves less time for artistic development…which I feel is crucial to the artist.

Anything else you’d like to add?
Columbia is a great area to perform and if we all do our part to support music and the arts- the city will grow for the better, so I am very optimistic!

I’d like to see local jazz saxophonist/Jazz educator Bryson Borgstedt featured in an upcoming Artist Spotlight series! I’ve known Bryson since the mid seventies and he really knows how to blow!

Kyle’s bio:
Kyle Whitlock is from Lancaster, South Carolina and his
main passion is musical performance and composition. He is a
multi-genre studio composer of Modern jazz, Progressive Rock,
R & B, Electronica, World, and solo piano music, and
also performs in many different local jazz and variety
music ensembles. During the last 30 years Kyle has written
music for Radio and Public and Commercial television. He
has played keyboards and drums/percussion professionally for
over 40 years, and has written many instrumental compositions.
He has performed in major cities such as New York,
Nashville, and Las Vegas throughout his career. He has
shared the stage with musical artists Spyro Gyra, Najee,
Delbert McClinton, Archie Bell and the Drells, Brook
Benton, Mary Wells, and once played piano at a private
reception for former President Gerald Ford. Kyle has been
a member of the Funkdawgs virtual jazz group for over
ten years, creating and exchanging music with musicians
all around the world. He currently performs with many musical
groups in South Carolina- the KBC trio, the Coastal Breeze
Party Band, Bob Michalski, Rod Franco and friends, Harold
Burrell, Kristi Kirk Hood, The Love Handles, The Diamond band,
and Vocalist/Poet Eboni Ramm. Kyle received his
Business degree from the University of South Carolina, and
lives in the Columbia area with his wife Pamela.

Kyle receives much joy in watching all kinds of people smile
as he utilizes his sharp keyboard playing skills!