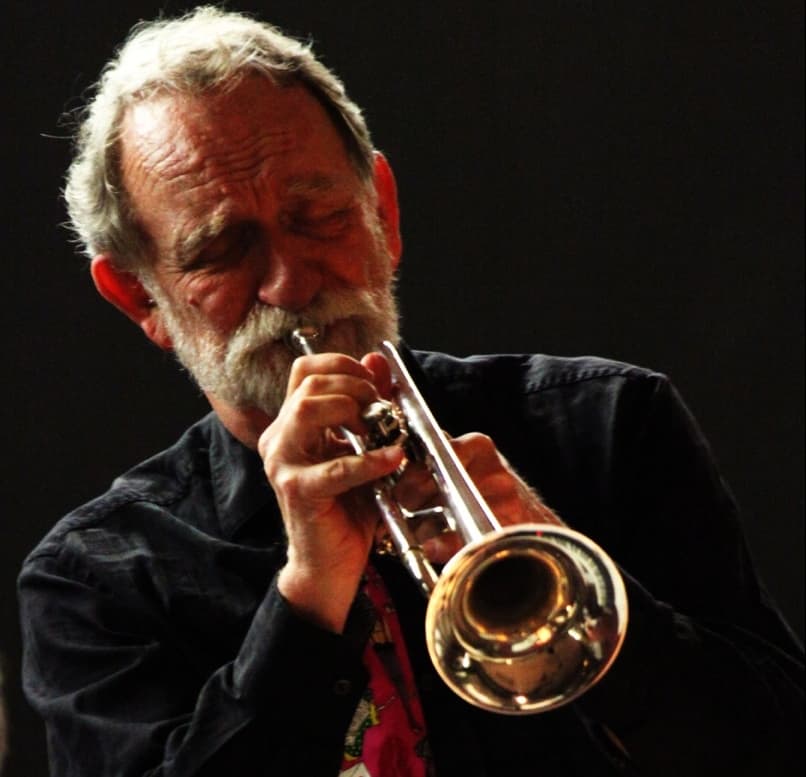 Dick Goodwin is legendary in South Carolina and known in many parts of our planet. He’s a soulful, sweet improviser on the trumpet, a fantastic pianist, awesome arranger from small groups to big bands, a great leader and a humble, intelligent, thoughtful man. He’s soft spoken, but speaks volumes. He doesn’t carry himself as a man who has achieved so much, but a quick google search reveals a long and exemplary career – and one that continues today. Seek him out. He is an authority on jazz music through and through. How lucky are we he calls Columbia, SC his home?

What is your earliest memory of developing a love for jazz music?
My dad took me to a Count Basie concert … I couldn’t believe what those trumpet players could do … but also discovered that instead of music on the stands, a lot of them had magazines or comic books.

Where did you study music?
I think that I’ve always studied music. As early as I can remember I was trying to analyze what was on the recordings that I had access to. I learned to sight-sing on my own, and as a band director in the Coast Guard when I was just out of high school I pumped musicians that had actual “book learning” for information. When I got out of the service I went to the University of Texas to study with Clifton Williams, Kent Kennan, Hunter Johnson, etc. I earned a doctorate in composition and eventually taught there for 10 years.

Is there a story behind your latest composition or recording? Where can we find it?
I’ve been meaning for a couple of decades to do a Christmas album … and I’ve recently started on that! A recent CD, “Studio Time 2 — The Dick Goodwin Big Band” is available on iTunes, at CD Baby, and here in town at Papa Jazz and at Pecknel Music.

What is your favorite tune to play and why?
That keeps changing … fairly recently I’ve loved playing “Laura” and have rediscovered “My Funny Valentine”.

How long have you been performing in Columbia?
I came to teach at USC in 1973 and was lucky enough to get involved with the good guys here.

Do you have a favorite venue in Columbia?
We’ve enjoyed playing at Chayz Lounge … but have also done concerts with different choral groups, etc.

What other cities, states, and countries have you played in and how do those experiences compare with Columbia, SC?
Played in NJ, TX, MO, SC, GA, NC a lot but have also done some touring east of the Mississippi. I learned a lot about how audiences perceive jazz on a dozen or so tours in Latin Am. and in Germany. Our smallest crowd was in Haiti — but it was the same night as the baseball game between Haiti and the Dominican Republic … so you know where jazz stands.

What is your most memorable experience as an artist?
There are lots of them: Hearing/seeing Spike Jones as a child — hearing the Philadelphia Orch., Robert Shaw’s choir, and many jazz groups (Kenton/Maynard Ferguson’s big band/Brubeck/Sonny Rollins/Eric Dolphy/Woody Herman/Lambert, Hendricks and Ross, Four Freshmen, George Shearing, Nancy Wilson, Oscar Peterson, Jerry Mulligan’s big band, Gene Krupa with Charlie Ventura, to name a few) while I was in the service — the Met & the NY Phil — having Stravinsky on campus while I was teaching at the U. of Texas — opening for Miles Davis, Colman Hawkins, Stan Getz, Blood, Sweat and Tears, Carl Fontana, et al — backing Bob Hope, Natalie Cole, Johnny Mathis, etc. — gracious, I need to stop — but how about playing with Teddy Wilson, Red Norvo, Joe Jones, ….

What music genres and/or artists influence your style and approach and why?
I try to listen to everything … there are great artists in every genre, but you have to dig. I listen to a Mahler symphony and ask myself, “What is he going to teach me today?”

Who is your favorite Jazz artist?
‘Tis an impossible question … but I always loved Clark Terry’s sound, admired his technique and appreciated his showmanship. We were able to give him an honorary doctorate at USC.

Who would you give credit to as your mentor(s)?
All the composers and arrangers that came before me, of course … plus some great teachers and fine local players that allowed me to be part of the scene.

What is the best advice you ever received as a musician?
Learn to sight sing.

What is some advice or statements you’d like to offer to up-and-coming musicians, your peers, live music venues and/or the community in general?
Louder won’t necessarily get their attention.

Music is a way of communicating and connecting with people. What are your thoughts on this? What are some ideals and values you’d like to reflect in your music?
When I was leaving the house with my horn my father would say, “Play pretty”.

How often do you practice or give time to your craft?
I play at least some everyday … and I compose/arrange everyday.

Tell me about your band and how everyone came together or about the musicians you usually play with.
I heard Jim Hall with the North Texas O’Clock Lab Band and thought at the time that life would be good if I ever had a chance to play with him. Not long after that we were both hired to play on a David Amram triple concerto grosso with the Austin Symphony … and we have been making music together ever since … so life is good! Most of my fellow musicians have been with me for a number of decades, they stay at the top of their games, and I treasure all of them.

Have you ever lost your instrument or gear during travel? Or do you have a funny story from the road or a gig?
Too many times and too many stories to address here …

What are some ways that we can expose younger generations to Jazz? What are your ideas on how you can help grow the scene?
We do programs for young people … and just hope that some of them will be moved by the music and be interested in playing or at least listening to jazz.

What does the Columbia, SC jazz scene do well and what does it need to do better?
Interest in our music ebbs and flows … there have been good times and some lean years … and I think that it is natural. DJ’s often rule the roost in clubs, and it is hard to compete with television and an easy chair. I enjoy doing concerts and I know that you have to promote the event … and you need to present a good SHOW for the audience. I think that it is important to play honestly … but not be self indulgent. You can do your own thing at home. Going into a concert with a solid plan really can make a difference.

Anything else you’d like to add?
Yes, Mark, thanks for all your efforts on behalf of the jazz community.
.
.
.
RELATED POSTS: https://colajazz.com/category/artist-spotlight/