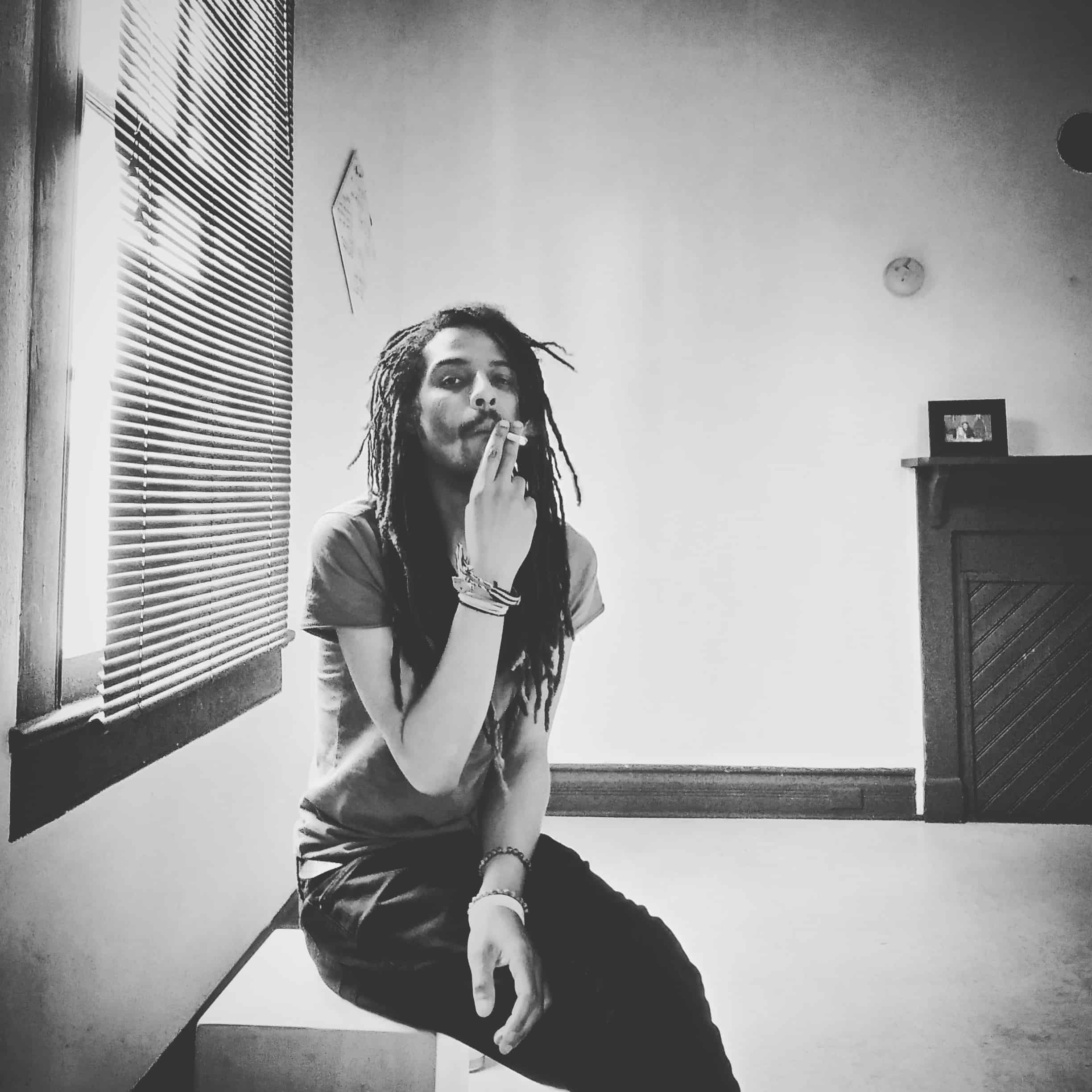 Nick Brewer. All you have to do is say his name and you have to smile. He is easily one of the most well-known musicians around Columbia, SC and one of the most interesting in character, attitude and artistry. His reputation precedes him in every way you can imagine. It would not be a stretch to say Nick adds a tremendous amount of fun and humor to our Columbia “Cola” Jazz scene. But don’t be fooled, Nick is a great musician and comfortable in a myriad of styles from straight-ahead modern jazz, traditional jazz to hard-core rock and even pop music. His soon-to-be released rock album is one of the best I’ve ever heard! He’s a true talent and we’re lucky he’s around!

What is your earliest memory of developing a love for jazz music?
When I was eleven years old, my piano teacher, Mildred Dexter (God rest her lovely soul), bought me a cassette tape of Peter Nero playing Broadway tunes. I played that tape every day. His renditions of Phantom of the Opera and “Maria” from Westside Story still haunt me. He was also my first concert. Saw him like a year later playing a small town hall with just an upright bass player. I can still remember how charming he was. Had the whole crowd laughing.

Where did you study music?
In my parent’s basement mostly. I played so often that they moved my bedroom and the piano into the basement so that I could play all hours of the day. I also attended the Berklee College of Music just to drop out and give my Dad a hernia.

Is there a story behind your latest composition or recording? Where can we find it?
I’m sitting on an album of my band, By The Bull, that I consider my greatest artistic expression to date. I used the seven chakras as a muse to write seven tunes for a record I’ve yet to release called “Toise”. I opened myself up to listen to my gut and heart and mind to align with God and love. All of the Sonic aspects of the record I’m proud of. All the keyboard sounds are custom made from saw waves. The guitars are huge. I’ve painstakingly worked tirelessly on every single sonic detail. There are melodies that reoccur subtly in other tunes. 7/4 time signature appears a lot as well as passages being replayed seven times. Jonathan Palance gave me one hell of a performance on drums throughout the record. As to when and where you will be able to find it is still a work in progress, but the album is finished.

What is your favorite tune to play and why?
That’s like asking me what do I want to eat today. It changes everyday. Sometimes I want jerk chicken. Sometimes I want Italian. Sometimes I want Korean food. If I have to play this game, for jazz, I’ll take “Beautiful Love”. I’ve learned how to squeeze all of the Romanticism and melancholia out of it. Plus there’s blues in it.

How long have you been performing in Columbia?
Long enough to not have to wait for a drink at the bar too long.

Do you have a favorite venue in Columbia?
The Speakeasy is the only venue that accepts my debit card.

What other cities, states, and countries have you played in and how do those experiences compare with Columbia, SC?
I’ve played all over the Continental USA several many times with several many different kinds of acts. Besides Los Angeles and NYC, where people just stare at you while you perform and then afterwards while you’re at the bar they compliment you, most places in the country I’ve seen kids kill themselves having a great time vibing and dancing to the music. Only in Columbia do I feel a detachment from audience to bandstand. Not to say they aren’t listening, I’ve just experienced a higher level of appreciation for a seasoned musician in other cities. But I know Cola and Cola knows me, and there’s some comfort in that to take a nap in.

What is your most memorable experience as an artist?
I live in the moment, so this is a particularly difficult question to answer. I’m not sure, and I don’t remember shit.

What music genres and/or artists influence your style and approach and why?
Dang I’m not even halfway through yet? Ugh. I’m losing interest, but I can plow through.

I used to think jazz was the freest form of Music. The improvisational aspects of the genre is what drew me in. I’ve come to learn that songwriting is the freest form. There I can control the meter, tempo, harmony, lyrical content and the emotional temperament. That being said, I’m influenced by clever songwriters. So genre doesn’t matter. I’m listening for the tune. There are too many to list, but here are some artists that are in my car CD player right now: ELO, QOTSA, Jamiroquai, Poison The Well, Jim James, J. Cole, and Bosnian Rainbows.

Who is your favorite Jazz artist?
Jonathan Lovett, but Robert Gardiner is a close second. Really though I could listen to John McLaughlin and Mahavishnu all day everyday.

Who would you give credit to as your mentor(s)?
Mildred Dexter was my first teacher who introduced me to Bach and Ravel and Beethoven. I can still smell her Steinways and cigarettes. I’m smoking as I’m writing this. Alphonso Jiles, a Berklee grad, jazz drummer and my high school band director encouraged me everyday. His positive and complimentary vibes gave me confidence. Skipp Pearson, Reggie Sullivan and Robert Gardiner are the local mentors that actually hired me. Shout outs. There are others, but I’m so done with all this typing.

What is the best advice you ever received as a musician?
There are no wrong notes. You can make anything work. But there are wrong notes. I meant to play that.

What is some advice or statements you’d like to offer to up-and-coming musicians, your peers, live music venues and/or the community in general?
Find a style for your own. Be a unique mother fucker. Don’t bore me if you are gonna play or say something that I’ve heard a million times.

Music is a way of communicating and connecting with people. What are your thoughts on this? What are some ideals and values you’d like to reflect in your music?
Every raw emotion that we experience as human beings has to be fully explored in order for it to be available to you in your wheel house. That’s how you connect an audience. I’m not afraid to be afraid. I’m not scared to display my bouts of depression. I’m not too shy not to show you the laughter and comedy in my heart. I write and play with my heart fully exposed. Fiercely. Unapologetically. Fearlessly.

How often do you practice or give time to your craft?
Nowadays I mostly think about music philosophically. I analyze it more than anything. Form, lyricism, moods, how lines connect, tones etc. I’m just listening now. The moments of shedding for hours are rare now. They come and go. Mostly I live and seek out life. I’m practicing that shit.

Tell me about your band and how everyone came together or about the musicians you usually play with.
I’m a free man. I’m currently not dating any band at the moment.

Have you ever lost your instrument or gear during travel? Or do you have a funny story from the road or a gig?
Ask Reggie Sullivan about the hot chicken and homeless people in Nashville. You will laugh.

What are some ways that we can expose younger generations to Jazz? What are your ideas on how you can help grow the scene?
They have to find it for themselves. If you give it to them easily they won’t appreciate it as much. Every piece of Music or band that I can’t live without I discovered by plain curiosity or happenstance.

What does the Columbia, SC jazz scene do well and what does it need to do better?
Everyone are brothers and sisters here. That vibe is strong. We fight, but we don’t leave each other behind. We argue, but chances are I’m gonna see you on a gig the next day. We also challenge each other positively. Hire me more often. Then the scene will be alright.

Anything else you’d like to add?
Dang I finished this thing? i luv everyone
.
.
.
RELATED POSTS: https://colajazz.com/category/artist-spotlight/